It's go time for Halloween in 30 minutes.  Kid is effin' EXCITED.  We've been counting down Halloween for 18 days.  In 4-year-old terms, that's like 47 years.

Let me preface this next statement by saying that I LOVE Kade's pre-school.  Ok, now I'll say that I'm a little irked that they told them to wear their costumes all day today.  Yes, it's Halloween and it makes good sense that a costume that I spent $20 should get some good use.  But no, you can't trust a 4-year-old to not roll around in cat shit on the playground while wearing said costume that also needs to be worn that same evening for trick-or-treating with no inbetween time for washing.  And no, I'm not buying two costumes, because I'm extremely cheap.  I was going to pull out last year's Spiderman costume and was all going to be like "yeah, I'm the coolest fucking Mom ever!" and let him wear that to school and change into Captain America for the evening round of asking strangers for candy.  But then I couldn't find it.  And realized that I think I gave it to some good friends who have a little boy.  Because at the time I probably said to myself, "When in the hell will he wear this again?"  Turns out, the answer was next Halloween.  Oops.  But hey, I'm still a resourceful Mom that was out of wine so was able to come up with something not quite near as good but still workable, a football player!  He's got TWO football jerseys!  I can put paint on his face!  He'll love that shit!  So BAM!  Mom saves the day that she almost ruined! 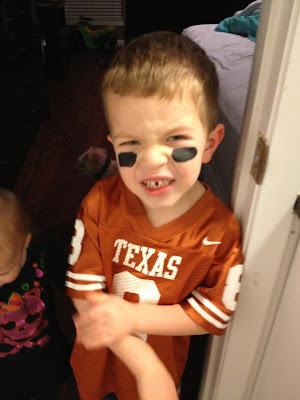 The Hubs is not a fan of dressing up.  Whomp wah.  But I did create a work suitable costume for him for work 3 years ago.  And he's dead sexy.  Mah man!  Yow!  (I know that's a little much, but that's how I feel about this guy, he's the peanut butter to my jelly, seriously, favorite person in the whole wide world.)  Here is in 2009 dressed as "God's Gift to Women", but back off ladies, he's all mine. 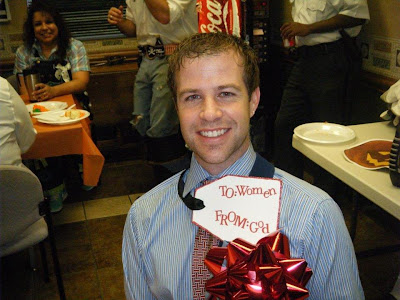 I love dressing up, and this year my costume was F to the REE!  (That's free, for you non-spellers out there.)  Unfortunately, no one got it.  Well, my Daddy did, but that's probably because we're like-minded and he loves me a whole lot.  Everyone thought I was dressed up as Lucille Ball.  And, in hindsight, how smart would that have been for me to do?  I've got the red hair, all I have to do is go vintage.  I'm an idiot.  Anywho, also, I kind of just felt like a hipster.  So, thanks for ruining my costume, 20-somethings.  Maybe next year I'll be Lucy, but this year, I was a badass Rosie the Riveter!  We Can Do It! 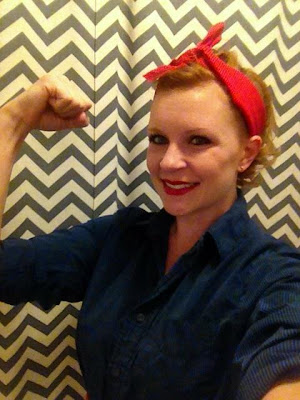 No pictures of Lily yet, but you know that for baby girl's first trick-or-treating adventure Momma is going to over-photo the shit out of that, stay tuned for the post Halloween post.

Happy Halloween, y'all.
Posted by Candace at 2:54 PM